Unsung heroes of sport in the region were honoured at this year’s North East Disability Sports Awards, which took place on Thursday 14 March.

The awards, which were held at the Kingston Park Stadium, recognise and celebrate the achievements of participants, coaches and clubs involved in disability sport during 2018.

Almost 200 guests from the world of sport were in attendance at the event, with over 70 individuals and clubs nominated for the ten awards on offer.

There were a host of winners representing a wide range of sports, including Ellen Stephenson who won the Young Female Achiever award for her achievements after being selected for the Down Syndrome GB Team. Ellen had already become the European Champion in 2017 and in 2018 travelled to the World Championships in Canada where she was crowned World Champion, winning seven gold medals and one silver along the way.

The Team of the Year award went to Northern Thunder powerchair football team. The team won the national league in 2018 and qualified for the Champions Cup in Denmark where they finished an impressive third.

The final award of the evening went to Female Personality of the Year, Emily Stewart, aged 20. Emily competed in the Cerebral Palsy World Games in Barcelona in 2018 and came back as a five times World Champion in 100 metres, 200 metres, long jump, shot putt and discus. She also competed in her fifth UK School Games, winning gold in the shot putt for the third year in a row.

Becks Lippe, assistant director of County Durham Sport said: “These awards are a fantastic way to celebrate the successes of our region’s sporting stars. Everyone nominated deserves the highest of praise and recognition for their commitment and achievements. During the nomination process we’ve heard about some very talented sportspeople and lots of activity being provided in our community sports clubs. It’s great to have the opportunity to recognise and celebrate the achievements of these participants, coaches, clubs, schools and other organisations.”

The event was organised by the region’s County Sports Partnerships, in association with Everyone Active.  The event was also sponsored by Active Northumberland, D&P Trophies, Metro Rod North East, SMILE Through Sport and Sporting Chance.

The full list of winners and their achievements are as follows:

Josh Waddell was ranked number one in the world at under 17 fencing in 2017.  He now competes in the Great Britain senior squad in both epee and foil, winning a silver medal in the Senior Team Foil in Warsaw, and achieving 18th and 21st in the Paralympic rankings.

Internationally he is ranked 47th in men’s epee and 50th in men’s foil, and is by far the youngest person to be competing at this level. 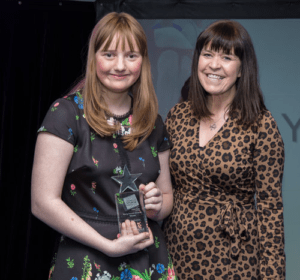 Ellen Stephenson trains predominantly with Newcastle Swim Team, and in 2017 was selected to swim for the Down Syndrome GB Swimming Squad.  Since joining the GB team she has had phenomenal success.  Having already become European Champion in 2017, she travelled to Canada in July 2018 to represent Great Britain at the World Championships, winning seven gold medals and

one silver, and being crowned World Champion.

One of her biggest achievements in 2018 was gaining the 100 metres Backstroke qualifying time to compete at the British International Para-Swimming Championships.  She currently holds 26 Junior and Open, long course and short course world records.

Tees Valley Sound Tennis is a club delivering high quality tennis opportunities for people with visual impairments.  The number of players at the club has doubled in the last year, with the club having an enormous impact on the lives of many disabled people. 2018 was an excellent year for the club, with its players bringing home five singles and two doubles winners trophies in the seven tournaments held across the UK. 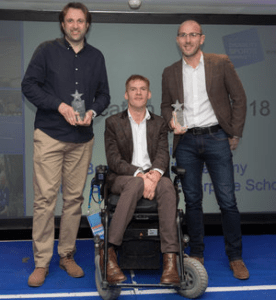 Beaumont Hill Academy in Darlington is a special educational needs academy which has put in place a number of new initiatives to provide more and better quality sporting opportunities for its pupils.  The academy has developed links with local clubs and a number of national governing bodies to provide better links to after school community provision.

Epinay Business & Enterprise School in South Tyneside have an exceptional PE and sport offer, providing a wide variety of competitions and organised events.  They have breakfast and after school clubs in place based on the interests of their pupils.  They have partnerships in place with many local organisations to further enhance their sporting offer, as well as offering their pupils the opportunity to plan and facilitate sporting activities for their peers, undertaking qualifications to develop their leadership skills. 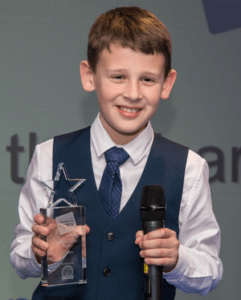 PARTICIPANT OF THE YEAR, Ben Hollins

This award is for a disabled person who, over time, has overcome obstacles or personal difficulties to achieve their specific sporting goal.  It is about the power of sport to help individuals overcome adversity, though not necessarily winning sporting honours.

Ben Hollins takes part in martial arts and football regularly at school, he attends the after school athletics club, he plays for the school football team and has also tried out for the cross country team. He has taken part in rugby, ice skating, rock climbing, and pole vault.  He enjoys swimming, going to the gym, and he also plays football for Middleton Rangers.

This award is for a volunteer, administrator, official or organiser at any level who has, over time, demonstrated a high level of commitment and made a very positive contribution to disability sport.  This person may work ‘behind the scenes’ of a club, team or scheme in a crucial role doing a job which is often not recognised.

Amy Foggett has been instrumental in the success of Cramlington United Football Club’s disability section since it was formed.  In 2010 she volunteered to be on the committee and played a key role in the development of the disability section, bringing numerous teenagers and young adults along to start a new team.  Back then the club started out with one team but over the course of the last six years this has grown to three teams, predominantly due to the hard work of Amy.

She is much more than a coach to the players, and has taken the time to help three of them to complete their Level One coaching badge.  She is now looking to start another team, and her drive and determination is the reason why the club has an established disability section and why it goes from strength to strength. 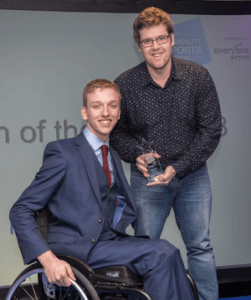 COACH OF THE YEAR, Matthew Porter

Matthew Porter from Bishop Auckland Table Tennis Club is dedicated to promoting inclusion in the sport of table tennis.  He gives up a huge amount of his time coaching children with disabilities on a voluntary basis, regularly leading sessions to help the players, and creating development plans to improve their skills.  He has also mentored other coaches, including some with disabilities, helping them to grow and develop.

He has completely integrated disabled and non-disabled players into top squad sessions, embodying everything a coach inspires to be with inclusion.  His coaching abilities have been widely recognised through him being chosen to coach at the British para table tennis training days, and he is currently supporting three players on the British Para table tennis development pathway, who have had international success.

TEAM OF THE YEAR, Northern Thunder

This award is for big or small teams that have achieved success and demonstrated a strong team spirit and a commitment to everyone within their squad or wider club.

Northern Thunder Powerchair football team have five dedicated players playing powerchair football in the national premier league.  Having won the national league in 2018, they qualified for the Champions Cup and travelled to Denmark in October, where they were up against the best teams in Europe. They finished in third place in this European competition.  Two of their players also represent England and will compete in the World Cup Qualifiers in Finland in May.

Stephen Miller has been representing Great Britain for over 20 years in the sport of athletics, competing in six Paralympic Games, seven World Championships and six European Championships, winning a staggering 28 international medals.

Emily Stewart competed at the Cerebral Palsy World Games in Barcelona in 2018, coming back as a five times World Champion in the 100 metres, 200 metres, long jump, shot putt and discus.  She competed at the Anniversary Games at the Olympic Stadium, finishing fourth in the 200 metres in front of 27,000 people.

Emily also competed at her fifth UK School Games, winning gold in the shot putt for the third time in a row, and her tenth medal in the event. She has been invited by British Athletics to be part of their Paralympic Development Academy for 2019 and is aiming to compete at the next Paralympic Games in Tokyo.