“I started rugby when I was 9, it was just one of those things you do as a kid. But when I went to secondary school I joined a girls team and absolutely fell in love with the sport!

It’s not easy being sporty in school and I loved rugby because it proved that you can be a normal girl with normal struggles and still enjoy being athletic and sporty!

My team mates really got me through some difficult stuff, even when I got very ill. When I was too ill to play I used to go along and support and they always made sure I was involved still.

I had to have a stoma created when I was 17 and I thought I wouldn’t be able to play rugby anymore. I was really upset but didn’t really have a choice. However, having the stoma made me so much better that I was able to go to university where I was invited to play rugby again.

I was super nervous about it but said yes anyway and decided to at least give it a go. Would the bag survive tackling, would it hurt too much, would the bag leak everywhere?? (Very problematic!!!) So I invented some padding and with some help from the stoma nurse we found a support belt that worked. I went off to my first session and joined in just like old times!

The best bit is that nobody even knows about the stoma unless I tell them but every time someone finds out, they are just really curious and impressed that I can keep playing!

Sometimes the bag leaks, but I have got good at changing it on the side of the pitch.

My team mates accept me and my stoma as they would anyone else, I’d say that it’s less of a problem than an injury would be. Playing rugby has given me the confidence to push the boundaries, do the things I never thought possible and find new ways of dealing with problems. My friends know me first as a team mate, second as a friend and only last as ‘the girl with the stoma’.

You can do anything you want to so never stop doing the things you love, I haven’t!” 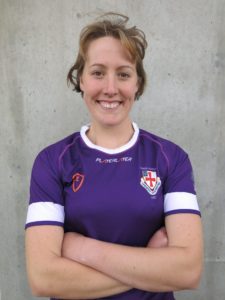